Theft Suspected in Rash of Missing Dogs in the Northeast – UPDATED

Update: On Tuesday, October 17th Shiloh appeared back at home. Around 10:00 pm her owner heard a vehicle, and went out to checked on their other dog. She was ok, 40 mins later her whistled for Sally, their other dog, to his surprise Shiloh crawled out of her dog house.
“She couldn’t walk or stand, her face swollen, unrecognizable, ribs hurting but she could still wag her tail when we touched and spoke to her. We know she was brought back, dropped off, maybe article scared (them) but she’s back, hurting, battered but gonna be ok with alot of TLC. She has been at vet since last night for medical care. We get to bring her home in a day or two. She’s now eating and drinking, standing but not walking. We are so grateful to have her back and so heartbroken for her pain she’s suffered.” Stated one of her owners in an update to the Facebook Group LOST PETS : HELPING REUNITE DISPLACED PETS OF SASKATCHEWAN

Recently an unusually high number of dogs going missing in the Sylvania, Charron Lake and other areas south of Tisdale has the RCMP taking the issue seriously.

Reaffirming their owner’s beliefs that some or all of these dogs may have been stolen, rather than just wandered off, is a report from a resident near Bjorkdale on Saturday October 14th, witnessing a grey Dodge pickup in their yard throwing meat to their dogs. The truck sped away when the owners came outside to find out what they were doing. The truck was last seen heading towards Sylvania area.

Also suspicious is that several of the dogs that have gone missing were not alone. In at least three of the reports, the missing dog was with another dog but only one went missing, despite the fact that the dogs always stayed together. Most of the missing dogs were large breed dogs, and all the owners conducted exhaustive searches by vehicle, quads and on foot.

Karen Miller, of Sylvania area, noticed the number of missing dogs was unusual when she posted on Facebook, hoping others may be able to help her find her dog. Other people began commenting about other dogs also missing in the region and Karen decided it was time to contact the Tisdale RCMP. “With all the information I was receiving in a matter hours, we decided it was necessary to have the RCMP involved.”, Karen stated. The volume of feedback amazed Karen and she soon realized that there were so many missing dogs in the Northeast that something more needed to be done. Karen is working on a Facebook Group a way to track and record missing dogs and the areas they disappear from, specifically for Northeastern Saskatchewan.

Karen is working with other dog owners to create awareness and encourage everyone in the area to report missing dogs to the RCMP, something many people wouldn’t think to do for a lost pet. A file has been opened with the Tisdale RCMP. Owner Jacey Langen, who called to report her Husky missing, was told by the RCMP that her’s was the fifth missing dog report that week.

Residents throughout the northeast should be on the lookout for these dogs. Dog thieves have been know to steal and animal and later dump them in a different locations for various reasons. Also people are being asked to watch for these dogs on buy & sell sites such as Kijiji and Facebook groups.

If you see any of these dogs or have any information that may assist in the RCMP investigation, please contact Tisdale RCMP at 306-878-3810

Three of the Missing Dogs 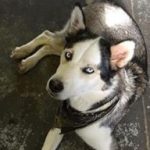 Jacey Langen’s dog, Summit, was last seen near Sylvania on a farm about 2-1/2 miles from their home, along with Jacey’s male Husky. The two dogs had apparently hung around for a couple of hours at the neighbouring farm, however Summit had left alone. The male Husky was located and is back home now.

Her owner says it is highly unusual for the two to be apart from each other. Summit is a friendly dog and may have been picked up by someone travelling through the area, so her owners are asking everyone to watch for her in areas outside of Sylvania as well. Jacey has contacted Shelters and vet clinics all over the region with no luck finding her.

A resident near Charron Lake (Nacaim area) last saw his male purebred black lab, Ryder, when he left for work on Wednesday, October 11th. When he arrived home from work around 3 pm that day, only one of his two dogs were there and Ryder was missing. According to the owner, both dogs always stay together and have never been know to leave their property. A witness also told him they where working in a nearby field and saw a red Chevrolet drive by his property three times. Like the others, they searched extensively for Ryder and could not find him. 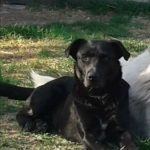 Karen Miller let her two dogs, Shiloh and Sally out early Friday morning, as she was leaving for an appointment she saw Sally but did not see Shiloh. While she thought it odd, the thought didn’t cross her mind that Shiloh was gone, rather than just out of sight as she drove out. Later that day her husband informed her that Shiloh was missing and she returned home to search for her.

“We immediately came home (around 4pm) and started a search of fields and bush with the quads. Of course we didn’t find her.”, Karen explained, “Did another search, if she had been hit or hurt by an animal predator we would have found her. Our white dog was shaking, upset when we left yard. The two dogs are always together.”

Shiloh owner Karen, also shared the story of how Shiloh came to be a part of her family.

“Shiloh is a “rescue dog” she was found as a pup with 4 others on side of Kelvington highway, in a cardboard box. It was 40 below, busy highway. They were left to starve, freeze, get run over etc. She was what we figured 6 weeks old, black lab perhaps a husky. We got her right after she was found. She had no pedigree, no background, but she fit our family wonderfully. Shes had the best of life, welcome into our hearts and home. When she is outside especially both of our dogs have heated dog houses, water dishes, self feeders. We are heartbroken without her. My big white dog sits in houses and just whines, she misses her so much.Shiloh was rescued once before and she needs to be rescued again. Our Sally also is a rescue. Their pedigree or bloodlines mean nothing to us.”

Karen Miller has created Shilo’s Page, a Facebook page dedicated to all the dogs suspiciously missing or stolen in North East Saskatchewan. Anyone who has had their dog go missing can post on the page providing the information needed to help track missing and stolen dogs. Owners can post the following information and it will be used to collect information that may help the RCMP in the current and any future investigations and to help reunite owners with their missing dogs. You can view Shilo’s Page and like or follow the page to see updates as owners post their missing dogs from Northeast Saskatchewan.