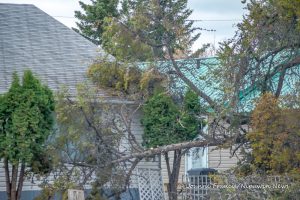 The massive system that swept across western Canada this week bringing wind gusts as high as 141 km/hr to some areas appears to have gone fairly easy on the Nipawin area, compared to other areas, particularly those in the southern parts of our provinces.

The high winds hit the Nipawin area just before midnight on Tuesday, October 17th and pounded the area with wind overnight and well into Wednesday. Many homeowners and businesses awoke to fallen trees, broken branches, damaged signs and even a couple of light standards blown over downtown. 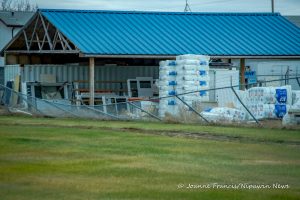 One home owner had a tree fall on their roof but the damage appeared to be minimal.

Nipawin Rona’s storage yard got hit pretty hard when a metal frame tarp shelter that had been covering bales of insulation was lifted by the wind, dragged over their chain link fence and blown across Highway 55. 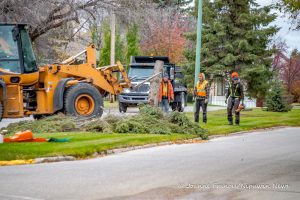 Town of Nipawin crews where busy all morning cleaning up fallen trees and debris while homeowners and business worked hard to get their own damage cleaned up, include many homeowners faced with the task of cleaning up spilled garbage and recycle bins. Even many those bins tucked away beside homes where not spared.

The most widespread damage was signs and banners, with portable signs being the hardest hit but even fixed banners unable to resist the strength of the wind gusts.

Matt’s No Frills on Railway Ave’s banner came partially loose but managed to survive the storm without damage. Taping and masking done by contractors painting the facade didn’t fair so well and, though they will need to re-tape and mask, not enough damage was done to cause any delay to their upcoming Grand Opening on November 3rd! 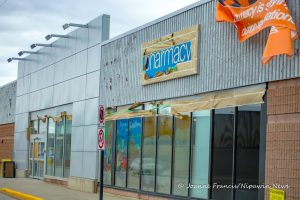 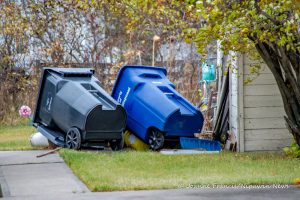 A couple of light standards broke free of their footing in downtown, one in front of IGA, the other by Nipawin Embroidery & Design.

South of Codette a large Atco trailer that had been sitting up on a blocks was blown of it’s footings and onto it’s side.