Harvest is virtually complete in the region thanks to a good stretch of warm and relatively dry weather. There are a few fields of crops such as canola, oats and flax left to be combined. Fall
work continues and many producers in the area have been able to reclaim acres lost to flooding in previous years.

Crop yields vary throughout the region but overall are well above average for the majority of crops. Timely rain and good soil moisture allowed for crops such as canola, oats, field peas
and flax to yield much better than normal for the region. Crop quality is the best it has been in a number of years, mainly due to lack of fall moisture and limited issues with diseases such as
fusarium head blight. The majority of crops are falling within the top two grades. Varying amounts of rainfall were received last week, ranging from trace amounts to 23 mm in
the Melfort area. The Nipawin area has reported the most precipitation (595 mm) in the region since April 1. 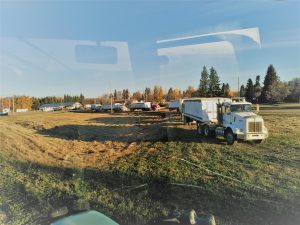 Average hay yields on dry land are reported as (in tons per acre): alfalfa 1.9; alfalfa/brome 2.0; other tame hay 1.7; wild hay 1.4; and greenfeed 2.7. At this time, the vast majority of livestock
producers have indicated that they will have adequate amounts of hay, straw, greenfeed and feed grain heading into winter.

The number of acres seeded to winter cereals is above average in most areas. Much of the region had adequate topsoil moisture at seeding time and producers were able to take
advantage of the quicker-than-normal harvest progress this year.

Just before 1:30 pm on Sunday October 13th, 2019, a John Deere combine caught fire as the farmers worked to get a quarter of standing...

March 21, 2019 – The Canola Council of Canada (CCC) - While there was some initial optimism that Chinese concerns with canola trade...