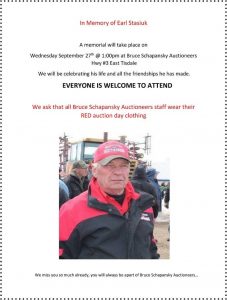 As our local communities mourn the loss of a well-known and beloved northeast resident, Earl Stasiuk, Bruce Schapansky Auctioneers of Tisdale are inviting everyone to join them at 1:00 pm on Wednesday, September 27th, 2017 at their place of business on Hwy #3 East, Tisdale for a memorial service to celebrate his life and all of the friendships he has made.

At approximately 7:10 a.m. September 16th Saskatoon RCMP responded to a serious two-vehicle collision on Highway #41 near Aberdeen, SK. A car and a semi unit collided in the northbound lane of Highway #41. Fire and EMS attended from Aberdeen, as well as an RCMP Collision Reconstructionist. The lone adult male occupant of the car, Earl Stasiuk of Melfort, was pronounced deceased on scene. The adult male driver of the semi unit was not injured. An RCMP collision reconstructionist and Saskatoon RCMP continue to investigate.

It is with heavy hearts we make this statement .

On Saturday morning we lost one of our own. Earl Stasiuk was killed in a car crash on Highway 41 near Saskatoon. Earl has been with Bruce Schapansky Auctioneers for 20 years. His presence will be missed more that we can even describe. He was not just a devoted staff member but he was mostly our friend.

Most of you will know Earl as our main ‘yard man’ , he unloaded and loaded equipment for most of our farmers. He rarely took a lunch of coffee break, he took the time to fill his ‘to go’ coffee cup and he was back outside doing what needed to be done. Doing what he loved , lending a hand, skid steer, loader, Earl was simply the ‘go to’ guy for so many. Not only was he the ‘go to’ guy for the yard but the ladies in the office. We could always count on Earl having his radio on and eager and ready to assist in any request we had of him. No matter how big or how small. He did everything with a smile.

We will miss his giant ring of keys jingling as he walked by. We will miss his energy. His great stories. His genuine kindness. Our entire staff is in shock and this loss is going to be so tough. Our hearts are broken. Earl will be missed in every way. As a friend first, and as a dedicated member of our staff. Safe to say our office will never be the same. We want to send our condolences to his family as well. We are here for all of you, as we may need you just the same. It does not seem real.

Due to public information received the stolen John Deere Skid Steer has been recovered . RCMP wish to thank everyone for their...

Members of the North East SPCA have been working hard to sell 500 raffle tickets for a chance to win a 2018 Polaris ATV....