The work of some industrious beavers combined with our recent windstorm knocked out power to a widespread region from south of Prince Albert up into Northern regions of the province on Sunday, October 29th, 2017.

Apparently some beavers had, in the absence of trees to build their dam, opted to gnaw at the base of several power poles, causing the lines that fed those areas to fall with several other poles still standing but badly damaged. With the rerouting restoring power to the remainder of their customers, SaskPower crews will continue to work on repairing the damage caused by the beavers.

How truly Canadian! An industrious beaver and strong winds were the cause of Sunday’s prolonged outage in Prince Albert and a big chunk of Northern Saskatchewan.
Power was restored by rerouting it in the system and our crews will be on-site to fix the damage later this week. #SkOutage #PowerToGnaw – SaskPower Facebook post 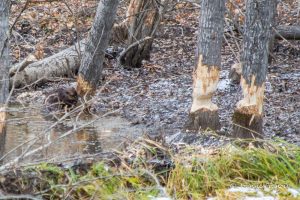 The modern beaver is the second-largest rodent in the world. An average adult beaver weighs 35 to 70 pounds and measures 4 feet long, including a 12-inch tail. A beaver can chew reportedly through a 5 inch Willow tree in three minutes! A beaver will chew for several reasons, to fall trees to build a dam, but also as a means to keep their every growing teeth from becoming too long. Beavers do eat the trees and, in order to save for the colder months will take branches and twigs and stick them in the mud under water to eat later on.