Fires of Concern grow to over 86,000 Hectares, Fire Ban Still in Effect

The Ministry of Environment indicated in an update on September 1, 2017, at 4:15 p.m. they are directing almost all provincial wildfire fighting resources to several fires in the Pelican Narrows area, including an incident command team, air tankers, crews, heavy equipment and helicopters. No community structures or critical infrastructure have been reported burned by the wildfires at this time.

Currently, in the province, there are three Wildfires of Concern, all of which are burning in the Denare Beach Fire Protection Area surrounding Pelican Narrows.

Granite Fire, located approximately 14 kilometres southeast of Pelican Narrows has grown to more than 60,000 hectares in size. Residents of Jan Lake and Birch Portage remain evacuated due to direct fire threat. Highway 135 has been breached by this fire, as has Highway 106 east of the junction with Highway 135. Fire threat exists to power lines beside the affected highways. 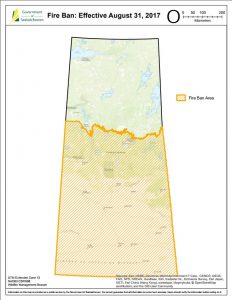 An expanded fire ban is now in place in for all provincial Crown lands, including provincial parks and recreation sites, south of the Churchill River to the U.S. border.

The ban affects all provincial parks and recreation sites in the ban area, including Lac La Ronge Provincial Park. 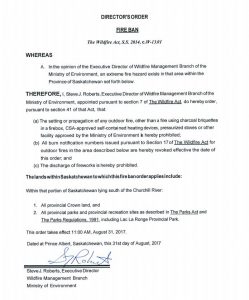 Due to extreme wildfire hazards, some roads and campgrounds may be closed. If you plan to visit a provincial park or recreation site, call the park in advance to confirm conditions.

This ban applies to provincial Crown land, and provincial parks and recreation sites. Municipalities, as well as regional and national parks, may also ban open burning in their areas of responsibility.

For the duration of the ban, no open fires are permitted. Fireworks are also prohibited. Self-contained heating devices, pressurized stoves, gas barbecues, propane fire pits, or charcoal briquettes used in an approved firebox will be permitted for cooking and heating purposes during the ban.

The fire ban is effective immediately and will stay in place until conditions improve and the Ministry of Environment rescinds the order.

Only Government of Saskatchewan fire bans are listed on this page. Please note that municipal authorities and national or regional parks may also ban open burning to address local hazards. Check if this applies to where you are.

All local fire bans are still in effect. The small amounts of rain have not made enough difference in the fire weather conditions. Follow Nipawin Fire on Facebook to receive uptodate notices regarding fire bans in the Nipawin area.

Nipawin News is offering rotating banner ads on our website for municipal elections candidates in Nipawin and the surrounding municipal...